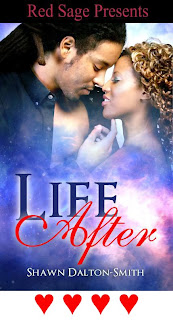 In Shawn Dalton-Smith's Life After offers a different take on the world of ghost.

At a time when everything is going her way Kalyste is killed. When she wakes up some time later she finds herself in a beautiful room and a comfortable bed, only to find that she has died. Now she has to come to terms with not only that she's dead and lost everything, but who is responsible for her death. If she can't she might turn rogue and have to live with the consequences.

Jude is the reason why Kalyste is dead. To pay for his sins he has been tasked with counseling Kalyste and helping her deal with her future. He never expected to fall in love along the way and somehow he needs to tell her the role he played in the end of her life.

Well written imaginative story line, except for some predictable parts. I can see this world the author has created turning into an interesting series.


Description:
Kalyste Spradlin had it all. By the time she was thirty, her women’s magazine was about to go international. She had money, beauty, youth, happiness, and about to marry the man of her dreams. Until the night before her wedding, she was killed by a drunk driver, her best friend Chantal. When she wakes up in Haven, and told she has to embrace her new life after death, she is hell-bent on revenge.

Jude has been a counselor in Haven for the past thirty-two years when he gets his first tough assignment. A woman who had everything to live for and wants revenge. Jude must help her embrace her new life in Haven. If she doesn’t, and decides to seek revenge on the woman who killed her, he will be duty bound to hunt her down once she re-enters the human realm, and kill her. Jude never expected to fall in love with Kalyste, but it will all come crashing down on him. The woman who killed her is his daughter, Chantal.

Reader Alert!  What Kalyste didn't learn in life, is taught to her after death. Jude is a man who knows how to make love to a woman from the top her head to the tips of her toes. Literally!