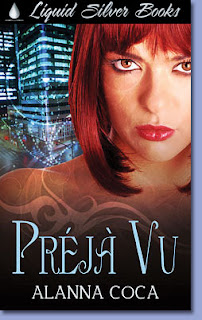 Buy this book on Amazon.com

Interesting surprise ending twist in this story keeps readers guessing throughout the novel.

Ryann Phillips has nightly premonition dreams. Most of the time she tries to ignore them trying not to get involved in strangers lives, but something about the dream she had last night is different from the others. In her premonition she sees the murder of a stranger.

Seeing the woman in her dreams in a local coffee shop Ryann can't help but go after the woman and warn her of the coming danger.

Trevor Kearney can't bring himself to believe the beautiful woman's premonition. The attorney is a black and white thinker. If he can't see proof it didn't happen, but slowly he begins to realize that Ryann believes what she is saying so that is enough for him to keep an eye out.

Not only that, but the victim in Ryann's dream, his client, wants him to find out what he can about the premonition. So he finds Ryann and tries to stop the murder of his client. In the meantime he isn't opposed to getting to know Ryann a little better.

I just loved Ryann and Trevor's as the heroine and hero of this book. Ryann is intelligent and well spoken. She isn't some psychic or tarot card reader off the street. She has no idea where the dreams come from and she does the best she can under the circumstances. Trevor isn't presented as some shark lawyer. He isn't even really a divorce lawyer most of the time, but just doing a favor for a fellow lawyer and handling her divorce. He's completely taken with Ryann and isn't afraid to show it.

This is a good read for those who like mystery, suspense with great romance and bedroom scenes.

Description:
You know the feeling, something vaguely familiar … but what if it isn’t something you’ve experienced before, but a prelude to an upcoming event?

Ryann Phillips has it all together. She's a successful architect with her own home and true friends. What she also has, are nightly dreams that eventually come true. Little snapshots into the lives of people she doesn't know.

She's used to them.

Attorney Trevor Kearney finds it hard to believe that his current client is the subject of Ryann’s latest vision, that of a violent murder. He reluctantly agrees to help Ryann prevent this one premonition from taking place. What he doesn’t count on is this particular psychic’s ability to make some of his own dreams come true.
on January 18, 2010