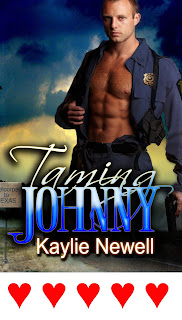 In Taming Johnny, author Kaylie Newell offers a look into the life of a man who has been hurt by the circumstances of his life he can't see that he's about to let the best thing that could ever happen to him walk out of his life.

Johnny is a police lieutenant who has see the worst life has to offer. After his mother's death when he is a young teen breaks his heart and leaves him angry, he decides to immediately join the army after high school. He serves three tours in Iraq and finally having enough of war joins the police force back home.

He's the lion with the thorn in his foot, always angry and he knows it. Enter sweet Emma. A woman who has had a crush on the cantankerous lieutenant since she started working in the records room at the police force. She knows his current temperament, but she still wants him. She knows that the man underneath all the hard shell can be soft and tender, but can she last while Johnny comes to grips with his feelings for Emma?

In Tammy Johnny author Kaylie Newell isn't worried about showing the rough man that Johnny is, but the reader can't help but understand how Emma feels and wants to cheer Emma on, even while you want to slap Johnny a few times yourself. Johnny is such a sweet name for this guy, it would seem he would have told people to start calling him John. Not a lighthearted read but fast and worth it.

Description:
He's got the temperament of a lion, and she's just the one to tame him.

Police records clerk Emma Beaumont has always played it safe, never taking many risks. Quiet, shy, and a little overweight, she's convinced herself that she's comfortable with the way her life is. That is until she lays eyes on incredibly sexy Lieutenant Johnny Street. But she's never met anyone with such a terrible attitude. He's a jerk. Everyone thinks so.

Little by little, Emma is forced to uncover a stronger, spunkier part of herself, one that isn't afraid to stand up to him. As she gets to know him, she starts seeing glimpses of a very different man. A man who has known great heartache, and as it turns out, has good reason for embracing such bitterness. Behind his sharp tongue and harsh demeanor, lies a young man who's desperately afraid of losing what's left of himself.

As Emma's intense desire for Johnny turns to love, she will have to ask herself how far she'll go to chip away at his frosty heart. And at what cost.