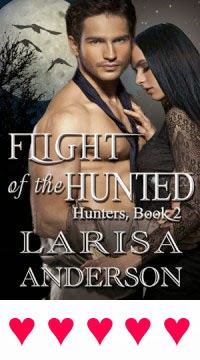 Clora is a hunter of paranormal creatures that have gone rogue, but she has never met another like Kale. Kale is a crow that can shift to a human. He doesn't consider himself a shifter. He has decided that Clora is his mate and as such she will carry his young and they will fight enemies together.

The only problem is that Clora doesn't immediately know what is at stake and that a mob of crows doesn't agree with Kale staying with her. Now she has to decide quickly what she will do to keep Kale with her.

This is the second in Larisa Anderson's Hunter Series. As with the first, Taming the Hunter, this book is a very fast read that doesn't give much time to get to know the characters. The theme and the idea in this book is interesting right off the bat, changing from the standard were shifts, such as wolves, cats and bears to crows and incorporating the mob and murder mentality was enough to keep me interested through the short story. It isn't necessary to read the first book to read this story, although it is good, short read that you might want to grab both and read them in order.

Description:
Never judge a bird by his feathers.

As a hunter of paranormal creatures, Clora has encountered many kinds of shapeshifters, but Kale is like nothing she has ever come across before. He's a crow shifter and is convinced that she is supposed to be his mate—something which she finds both terrifying and exciting.

However, Kale's flock disapproves of his plan to mate with a human, and when they intervene, kidnapping him, Clora is left to wonder if he's worth hunting across the country, and if it's worth risking her life for a future they may never have.