Romance Book Review: M. A. Stacie's A Path of Petals 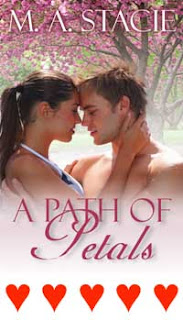 Spitfire Rain Teslar could not be further from Griffin's type. With her tattoos, lip ring and flighty attitude how can he possible be interested in her. But attracted he is and soon he can't look away from this woman.

Griffin has come to England from America to settle his father's estate. The stress of coming to finish the details of man who he can't even remember is enough without adding his strange new neighbor to the mix.

Rain knows exactly who Griffin is when she finds him lost on the side of the road. She sees he's lost in more ways then one and can't stop herself from trying to help him. No matter how grouchy he is there is something about the stuffy man and she wants to see him smile more and be able to get to know his father even though his father is gone.

At first it was a little hard to get into this book, starting off a bit slow, but as the pages progressed I was taken by the relationship forming between the two lead characters. So utterly different there shouldn't be any romance happening between them, but yet it just seems to work. Not to mention the steamy and romantic love scenes that can take your breath away, this is definitely one to read. While the publishers don't label this for book for its explicit love scenes, there are few too many to make it just a sweet romance and quickly falls into the erotic romance category.

Griffin Holt arrives in England intent on selling his deceased father's house and returning to America as soon as possible. Griffin is a workaholic, annoyed at this forced change of routine. When he gets lost and can't find the guest house he should be staying in his frustration multiplies. He follows a constant line of blossom trees, hoping to find at least one signpost. Instead, he encounters an odd, bohemian woman twirling in the road and showing no signs of moving.

Rain Teslar knows who the man in the car is, the whole town does and they've been waiting for years for him to return. He just doesn't realize it.

Rain instantly strikes up a friendship with him, though it isn't reciprocated at first. Each day her carefree nature annoys him a little bit less, and her help with unraveling the secrets of his past has him seeking her comfort. However, if Griffin's new life is to be a fresh start, changes have to be made—changes neither of them are willing to make.

Content Warning: Contains moments of cuteness that will make you swoon, along with sexy interludes that will increase your temperature. Also uses random, amusing British slang.