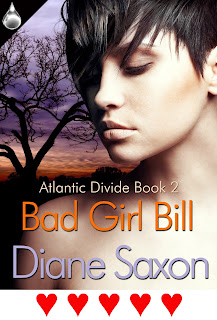 Bill has always been one of the boys. When she meets her best friend's brother-in-law, Michael, she falls instantly in lust for the very first time.

When British Special Forces Operative Michael takes his leave and visits his sisters in America, all he is after is some rest and relaxation and some time with the most important thing to him, his family. When he meets Bill he decides he wouldn't mind a little R&R between the sheets, but for Michael it can only be a one night stand with no commitment, because with his job he could be taken away at anytime for who know how long or he may never come back.

Can Bill really handle that kind of no commitment relationship. When it comes down to it she's just a small town girl.

At times this story runs a little slow but when the high points come it is definitely worth the wait. Bill is a complicated character with a rough attitude and a protective family that holds on too tight. Michael is more sensitive than he realizes and really needs to work on his British charm.

Description:
With a man’s name and a bad-ass attitude, will Bill prove to be far more than Special Forces Operative Michael Marsden was looking for? Sparks fly and romance ignites in Bad Girl Bill, Book 2 of the Atlantic Divide series from Diane Saxon.

From the moment British Special Forces Operative Michael Marsden meets Deputy Sheriff Bill Swann, sparks fly and lust flows. When a man meets a woman who rides a Harley Davidson and wears a gun strapped to her hip, he’s bound to be in for a few surprises. Because long-legged tomboy, Bill, is definitely not what she seems. Having made it clear he’s looking for a no-strings-attached fling, Michael realizes he has to use all of his tactical knowledge to negotiate his way around Bill’s five older brothers to get her alone. Then he needs to get past her defenses. And his own heart.