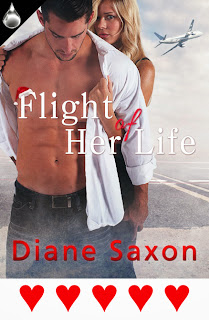 Bailey is preparing to announce her engagement to Phillip in Houston. On her way to Houston a couple of days before Christmas she gets held up as the New York airport cancels flights due to a snow blizzard. While at the airport she runs into her ex-boyfriend Sebastian. At 16 she was crazy about Sebastian, but he never seemed to be interested enough in her to stick around.

Bailey isn't having such a great day and through a series of mishaps, that Sebastian rescues her from, she may just get a Christmas surprise she never thought she'd get.

I've read several recent stories by Diane Saxon and loved them, this current romantic comedy has quickly turned into one of my favorites by the author. Great holiday fun read that will get you giggling through the pages.


Accident-prone Bailey must negotiate her way through a snowbound airport, a cancelled flight, and a blackout to get to her own engagement party. So the added complication of Sebastian, a cowboy from her past, is one problem she just does not need. When this comedy of errors threatens her future, her peace of mind, and her heart, Bailey has some not-so-easy decisions to make.

Traveling from New York City to Houston to meet her future in-laws and announce her engagement, accident prone Bailey finds herself in a situation beyond her control. All flights are cancelled the night before Christmas Eve, leaving Bailey stranded at the airport with a cowboy from her past.

Against all odds, Sebastian manages to rescue Bailey from one disaster after another, but is it too late to rescue her from her future?

Faced with a heartrending dilemma, does Bailey turn her back on the man who offers her a life of security, or does she run off to Maui with a cowboy?