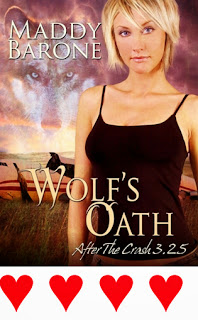 The continuation of the story of a group of women survivors from a plane crash that takes them from 2013 to 2064. In their own time Armageddon his taken place and over the next coming years women become a rare commodity. Now in 2064 the world is a different land. The women find none of the comforts of their time. No electricity or running water. The times have changed and the women find it is a lot to get used to.

One other change the women find is that some of the men have become a whole new race of shifters, men who turn into wolves. These men live among the humans. Like their wolf counterparts they mate for life. In the "Plane Women" some of the wolf shifters have found their mates.

Connie is the co-pilot of the crashed plane from the past. Since she and the surviving passengers have landed she has become the de-facto leader of the women who have moved into town and not mated with the wolves. These women have been making plans, but it soon becomes evident that they aren't safe unless the town continues to protect them. When Connie finds out the town has no intention of doing that, she feels helpless to come up with a plan, until Des, one of the wolf shifters, comes up with one.

Des has known that Connie has been his mate since he first met her when the plane went down. When he first tells her she rejects him, or so he thinks. Des has been patient and when he learns of Connie's dilemma, he tells her he will help if she marries him. He makes clear it is completely her choice, but Connie is a leader and warrior and wants to do what is best for the women. She attracted to Des so maybe it won't be so bad after all.

This was a very well written short novella that fits into the storyline of the series and actually I like this couple almost as much as I liked the first, Taye and Carla, book in the series. It isn't essential to read the entire series to read this short, but the stories as a whole paints a better picture of the world the author is building.


Connie Mondale, co-pilot of the crashed plane, has no intention of being forced into marriage, thank you very much. A former fighter pilot, she’s accustomed to being in charge. But leading two dozen undisciplined women is harder than flying missions over Iraq and Afghanistan. Scarier, too, with woman-hungry men outnumbering them two hundred to one. When Des, the grim-faced werewolf who is always there to support her, offers to share the load, how can she refuse?

Des Wolfe knows Connie is his mate. When she refused him, he tried to settle for being her friend. But when an opportunity comes to have her for his own, he grabs it with both hands, determined to have her love. If that means taking on a whole house full of women and making them his Pack, he’ll do it. There is no price too high for Des to pay to have Connie for his mate.

Can Connie give her heart to a werewolf, or will Des have to settle for only her body in his bed?(less)
on December 06, 2013