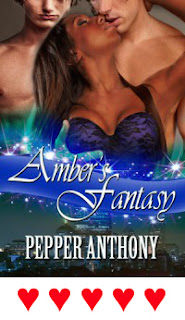 Amber Jackson is an up and coming executive in her firm. The rules are pretty clear, no dating between employees, but what is Amber suppose to do when she suddenly finds herself attracted to another employee at the firm. Ray Ferris is certainly handsome, but is he worth losing everything she has worked for?

Ray is certainly attracted to Amber and he doesn't believe that she is the ice princess that the other men call her at the office. He knows he should respect her ideals and stay away, but after he gets a look at the books he finds in a box in her office, he can't keep his mind off of her.

I sure hope that this book is the start of a series. I'm curious where the author would take Ray's shy cousin Cal. This is book is well written and I appreciate the characters aren't players and how much Ray's character wants Amber to have her fantasy.

Description:
If you had the chance to act out your secret fantasy, would you dare?

Ray Ferris is the first person to discover Amber Jackson's naughty secret desires. While helping her move some boxes, he stumbles on her stash of erotic romances featuring ménages. Despite a strict company policy prohibiting co-workers from dating, Amber finds herself inexorably drawn to Ray. She's never been attracted to a white man before, but his intriguing invitation to actually have sex with two men at one time captivates her imagination. When the barriers to their relationship are swept away, will Amber have the courage to finally act out her forbidden fantasy? And if she does, will the experience open doors to a whole new world, or cost her a chance at true love?