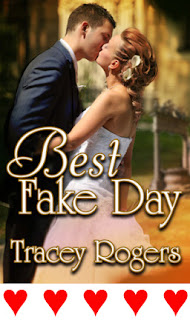 Jack Carter was a fixture of Izzy Latham's dreams when they were growing up. He was the boy from across the way that spent more time at her home than his own. Then one day he just left and so did Izzy's dream of a life with him.

Now Jack's back. He needs her help getting out of a jam her sister put him in. The only problem is that with Jack back in her life for just a little while all those feelings are coming back. She can't let that happen because Jack isn't the marrying kind and as their rouse brings them closer together Lizzy can only hope to leave without getting her heart too involved.

Good quick read with wonderful character development and strong leads. Izzy is a character to fall in love with. She's so good, she wants to help, but she's stubborn too. Jack is wounded but strong enough to understand himself.

Wedding photographer and romance lover Izzy Latham dreams of finding her own happily-ever-after. When her former teenage crush arrives at her doorstep, looking sexier than ever, and asks to marry her, it should be her dream come true, right? Wrong. It turns out he doesn’t want to actually marry her—he only wants to pretend to marry her.

Marriage hater Jack Carter will do anything to close his latest business deal, including finding a wife. The only person who can help him is his childhood friend, Izzy. Except Izzy isn’t a little girl anymore. She’s definitely all woman, and there’s an attraction between them that’s hard to ignore.
Jack has to convince Izzy to fake it, but the problem is that she hates to lie. However, she can’t deny her feelings for him either. So when Jack makes her an offer she can’t refuse, she reluctantly agrees to help him out.

Faking it is the easy part. But what happens when fake starts to feel so real?