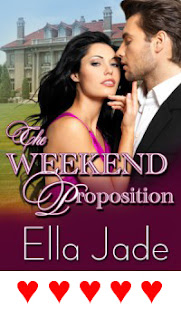 Life is pretty bleak for Coda. Her mother is sick, the rent is due, she has student loans to pay, she works two jobs that has nothing to do with her college degree and she hasn't had any offers in her chosen degree. When her boss overhears some of her woes he makes her a proposition that could help her take care of everything.

Spencer is in need of help. His ex-girlfriend is looking for a way to get back together and convince him it is time to settle down and get married. That isn't at all in Spencer's plan and he thinks it is time, once and for all, to convince everyone including his family that he and the ex aren't going to be together.

Spencer's solution is to find someone to be his date for a family weekend. When he meets Coda he can't resist. Just where will this weekend take the two of them?

Description:
One weekend—no strings, no expectations, and no commitments. On Sunday afternoon it all ends, or does it?

No-nonsense businessman Spencer Cannon has a dilemma. He's headed to Connecticut for the weekend to attend his cousin's elaborate wedding. His whole family will be there in addition to his obsessed ex-girlfriend Ava. According to Spencer's brother, Ava has been telling her friends she's planning a magical reunion with her favorite ex-boyfriend. Spencer's not in the mood to deal with her, but he can't miss the wedding. He needs a plan.

Struggling Brooklyn waitress and aspiring graphic designer Dakota Vercelli has fallen on hard times. College debts, pending eviction, and her sick mother are taking a toll on her. A chance encounter with Mr. Cannon, CEO of Cannon and Carrington Advertising, leads to a proposition that may be just the thing to solve both of their problems. Spencer's offer—spend four days with him during the wedding festivities and keep his ex off his trail. In return, he'll compensate her generously for her time. He needs a weekend girlfriend, and Dakota needs the cash.

It was just supposed to be a business deal, but after sharing a room, kissing under the stars, and attending a wedding, their attraction is undeniable. Will the illusion end when the weekend is over or is the proposition just the beginning?